Following a passion for learning from art to technology to blockchain 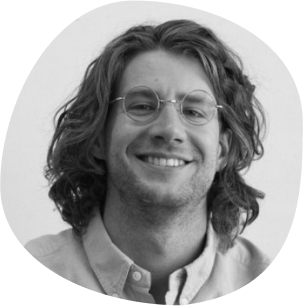 Nic Wilson is a Senior Developer at Cloudburst mainly working in TypeScript. He's spent most of the last three years working with Cloudburst's client Nice Healthcare. Below, Nic shares about his journey from art to technology and how his love for learning has served as his guide.

How did you come to be a software developer?

I've been playing around with computers since my family got its first one when I was in first grade, and I've been fascinated ever since. I spent most of my life thinking that I would go to college to study computer science, but ended up studying art for my undergraduate degree after an errant suggestion from my studio art professor. As it turned out, I went to school kind of in the middle of nowhere in Iowa at Grinnell College. So a lot of my interaction with the art world was mediated through the internet, and I worked with technology a lot in my artistic practice making digital art and CGI. As time went on, I just found that I enjoyed the kind of problem solving you do in tech more than I enjoyed the rest of the stuff that I was doing.

What's the story of how you came to work at Cloudburst?

Like quite a few others at Cloudburst, I went to a coding bootcamp called Prime Digital Academy here in the Twin Cities. Someone from my cohort put me in touch with one of Cloudburst's founding partners, and that conversation led to me joining the first version of the Cloudburst apprenticeship program and staying on when Cloudburst, SBC was formally incorporated in 2018.

The flexibility of being able to set my own schedule and hours I work per week was Cloudburst's draw initially. Cloudburst's flexibility has helped me balance professional development with things like spending time with my family, relaxing in my hammock next to Lake of the Isles and going for hikes with my fiancée on a sunny Tuesday afternoon.

From the beginning there were also lots of opportunities to be paid to learn and grow, whether through my core hourly work or Cloudburst X, Cloudburst's paid side hustle, giveback, and professional development program. It's also really exciting to work with clients where there's a chance to make a big impact on companies early in their lifecycles. Both Nice Healthcare and Cloudburst have grown so much since I've joined, and it's been super fun to be part of that process.

What have you used the Cloudburst X program to do?

I've used a lot of my Cloudburst X time to take courses or read books on new technologies. There's another local tech education company called Frontend Masters that has really great courses that bring in experts from all over the world. I've worked on a time tracking tool and set up a static site for a personal blog about software development to explore a technology called Gatsby.

I've been spending most of my Cloudburst X time recently on blockchain projects. One of those has been an arbitrage bot that interacts with Mango Markets, a crypto trading platform built on the blockchain Solana. I've also been playing around with a platform called Sunflower, a platform where you can create generative art using a JavaScript library called p5.js and then mint it as NFTs on the Ethereum blockchain. I've been using it to create art based on fractals, which are kind of just beautiful mathematically, but also often found in nature like in the leaves of a fern or romanesco the vegetable. My goal with that is to mint an edition of NFTs through the platform.

I started really paying attention to blockchain during the pandemic after some of my contacts in the art world lost work but then were able to find new sources of income through NFTs. I took an open online course from MIT called Blockchain and Money taught by the current chair of the SEC Gary Gensler.

Then I went pretty deep down the blockchain rabbit hole on Twitter and found an open source implementation of a Mango Markets arbitrage bot written in a language similar to TypeScript, which is what we use for most of the work we do here at Cloudburst. So I've been playing around with that, making a few changes and learning about how to make it more effective. I've even gotten to work on the infrastructure side too, trying to get the lowest latency servers for running the bot. It wasn't until after that that I came across WALTZ, the first collection of art on Sunflower. WALTZ consists of 10,000 unique artworks, each of "petals dancing in the wind," which spoke to me enough to purchase some. That inspired me to get back into trying to create something of my own after not making any art for almost a decade. It's been a lot of fun to scratch that creative itch again, and being in creative community with other generative artists on Sunflower's Discord.

The most exciting part of working with blockchain has been participating in marketplaces where the value created goes directly to the participants in the network rather than being shaved off by a really small percentage of people like in our current financial system. I've enjoyed getting to spend money on art in a way that supports artists better than the traditional gallery representation model does.

How else do you think of success when it comes to Cloudburst X projects?

The most satisfying kind of success I've had with Cloudburst X is when I've been able to use the time to follow my curiosities about a client problem to find a more elegant solution, and then introducing that learning into something we build for clients later.

I've used Cloudburst X time to learn how to leverage the static analysis that's provided by TypeScript to catch potential bugs before a program ever runs. It's helped us with annotating our code so we do a better job of navigating it and communicating about it across developers for Nice Healthcare. That capability has made it easier to scale the number of people working on the project.

That's awesome. It sounds like the Cloudburst value of Craftsmanship really resonates with you.

Yeah, what got me into technology is just a passion for learning. And I think the Craftsmanship core value aligns with that, like, to be successful like in technology, things are changing so fast that you have to be excited about like learning new things and finding new and better ways to do things.

Cloudburst X has been a great way to have the freedom to explore Craftsmanship. And then working with really early stage entrepreneurs has expanded my understanding of it as well, since at that stage there's the challenge of balancing doing things in a way that's really beautiful with being practical. With my blockchain project, I initially had this picture of coming up with some really elegant solution, but it turned out that the most practical and profitable solution was actually just something really simple. And that's oftentimes the case with our clients too.

If you're an entrepreneurial technologist who'd like to work with people like Nic, introduce yourself here. We'd love to hear about you and your craft.